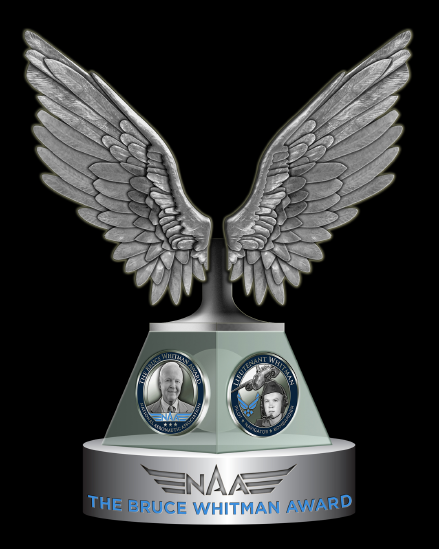 The Bruce Whitman Trophy was established by the National Aeronautic Association in 2019 in honor of the late aerospace executive and philanthropist.  For over 15 years, Whitman served as CEO of FlightSafety International, enhancing aviation safety around the globe.  His dedication to the aerospace industry was only matched by his selflessness in seeking to use his time and talents for the betterment of his country.  Whitman worked tirelessly to perpetuate the legacy of the Medal of Honor and support the objectives, programs, and activities of the Congressional Medal of Honor Foundation.  In addition to his work with the Congressional Medal of Honor Foundation, Whitman served on the board of over a dozen organizations including the Civil Air Patrol, Smithsonian National Air and Space Museum, Corporate Angel Network, National World War II Museum, General Aviation Manufacturers Association, and National Aeronautic Association.

The Whitman Trophy is awarded annually to “… outstanding individuals who have made significant contributions to aviation or aerospace in the United States, and who by working with museums and other institutions have promoted an appreciation by students and the broader public of the sacrifices and legacy of members of the military service.”

A deserving nominee will be put forth annually by the Chairman of the National Aeronautic Association to the Executive Committee of NAA for confirmation by majority vote.  The Whitman Trophy is presented at the NAA Fall Awards Dinner.

The first award was made posthumously to Bruce Whitman in 2019 as a tribute to his significant contributions to the aerospace industry over the past 60 years as well as his dedication to educating millions around the legacy of our military.