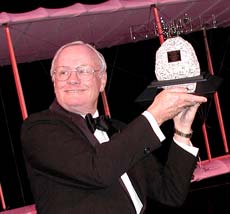 For almost the entire history of powered flight, NAA has been the caretaker of many of the nation's and the world's most prestigious aviation awards. Part of NAA's mission is identifying and recognizing those who have contributed to the "art, sport and science of aviation and space flight to the United States."

The most famous of these awards, the Robert J. Collier Trophy, was established in 1911. It is awarded annually "for the greatest achievement in aeronautics or astronautics in America, with respect to improving the performance, efficiency, and safety of air or space vehicles, the value of which has been thoroughly demonstrated by actual use during the preceding year." NAA presents more than a dozen awards throughout each year to honor these achievements.